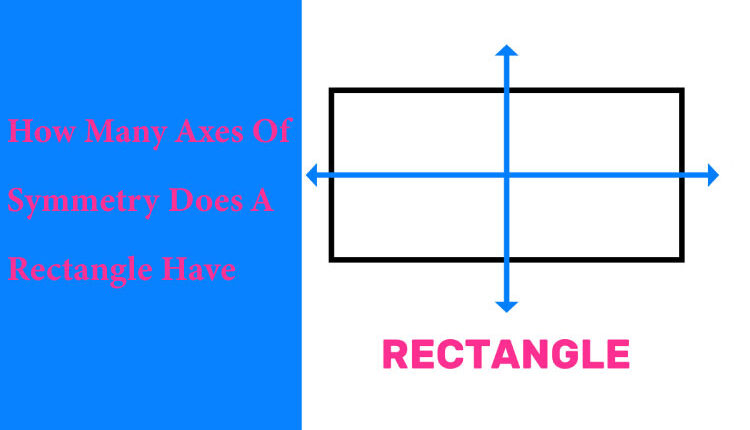 How Many Lines of Symmetry Does a Rectangle Have? Do you know The Taj Mahal, situated at the Yamuna River banks, is considered the largest symmetrical building in the world? Well, all these questions required a defined answer. The beauty of the “Taj” lies in its symmetry. Symmetry is often used in context with beauty, harmony, and eye-pleasing, praised by artists, but it is also a base for important mathematical and geometrical concepts. You can understand symmetry from a mathematical perspective, which will help you calculate the math of hidden symmetry in objects.

Disclaimer: Visualize geometry to get a good grasp on the subject. Visualization will take you to those unanswered questions enabling real learning. As mentioned by Stephen Hawking: “Equations are just the boring part of mathematics. I attempt to see things in terms of geometry.”

What is Symmetry and Lines of Symmetry in a Rectangle?

After flipping, turning, or sliding on each other, two or more objects resembling any line that splits an item into identical parts is called an “Axes of symmetry”. The resultant parts are called symmetrical to each other. In this article, you will learn about symmetry and its properties and dive deeper into the axes of symmetry of rectangles.

Now you might wonder, How Many Lines of Symmetry Does a Rectangle Have? A rectangle is a 4-sided polygon with two equal and parallel opposite sides having 90-degree angles at all sides. There are two axes of symmetry possible for a rectangular object. Straight lines cutting the rectangle straight into two equal parts can be drawn along the length or width. This line is called “Axes of symmetry” in the rectangle. The dissected parts superimposed perfectly explain the concept of “symmetric objects”.

Linear symmetry: Linear symmetry is also known as reflection symmetry. Linear symmetry can be determined by cutting the object through the middle point to produce two parts. These two parts are then superimposed and checked to determine whether they are identical. Are you wondering how many lines of Symmetry Does a Rectangle Have? Well, a rectangle can be cut along its breadth or height from the middle points of its sides. The parts produced after cutting rectangles along a line of symmetry are identical and thus called “symmetrical” to each other.

Regarding reflection symmetry, two parts are produced by drawing a line from the midpoint. These should be mirror images of each other to satisfy the symmetry conditions. The line drawn is known as the “axes of reflection”. Since we have only two lines that could cut the rectangle to produce identical objects, the linear symmetry is of order 2 for the rectangle.

Rotational Symmetry: Rotational symmetry is determined in an object by rotating the object by some angle (A1) and then comparing the original object with a rotated object. The key point is that the rotation should not alter the original object’s shape or size. If original and rotated objects superimpose each other, then the object is said to have rotational symmetry at the (A1) angle. Rectangle has a symmetry of order 2 when rotated at 180 and 360 degrees. This means the Rectangle is rotated around the X and Y axes by 180 and 360 degrees angles, the rotated and original objects are superimposed on each other. It produces identical objects even after rotation.

Let’s compare the symmetry of the rectangle with other quadrilaterals:

Rectangle v/s Square: When it comes to the question of How Many Lines of Symmetry Does a Rectangle have? Well, there are a few distinctions that can be made. The most obvious difference is that rectangles have two perpendicular sides, which are not always equal in length, while squares have all sides equal. This symmetry gives rise to different properties – for example, diagonals drawn in a square create four symmetric parts, whereas those drawn in a rectangle produce four non-symmetrical parts. Rotational symmetry is another area where these shapes differ; squares possess rotational symmetry at angles of 90°, 180°, 270°, and 360°, while rectangles only rotate about angles of 180° and 360°.

However, perhaps the most important distinction between these shapes lies in their uses: Squares are often used as basic building blocks because they offer such reliable stability and strength due to their perfect geometry. Rectangles, on the other hand, lend themselves more easily to curves and organic shapes due to their lack of straight lines.

Rectangle v/s Circle: Circle has an infinite symmetry against 2 for a rectangle. If any line is drawn from the center of a circle, that line will produce symmetrical parts. Since one can draw an infinite number of lines passing through the center of a circle, infinite symmetrical parts can be produced in a circle. Considering rotational symmetry, if the circle is rotated at any degree and kept on the original circle, it will completely superimpose the original one. Hence the circle has rotational symmetry of order infinity against 2 for the rectangle.

Rectangle v/s Parallelogram: Parallelogram is any quadrilateral with opposite sides equal and parallel. The specification of a parallelogram is satisfied by square, rectangle, and Rhombus. A Square has 4, a rectangle has 2, and a rhombus has two orders of symmetry. A small difference can be detected by comparing the rhombus and rectangle’s symmetries. The difference is in the side angles. Rectangles have all sides at 90 degrees, while rhombus does not. The sides of the rhombus are equal and at an angle such that when the equal length diagonals are drawn, four symmetric parts are obtained. When straight lines are drawn from the middle on the sides of the rhombus, the parts obtained are non-symmetrical since they are aligned at particular angles. The rotational symmetry for the rhombus is of order two, which is equal to that of the rectangle but at different angles of 90 and 270 degrees. The comparison of symmetry between squares and rectangles is already discussed in the previous section.

Rectangle v/s Triangle: Triangle has the symmetry of 3, 1, or 0 for equilateral, Isosceles, and scalene triangles, respectively. It depends upon the length of the triangle sides. An equilateral triangle has all equal sides; Isosceles has two sides while scalene has none. Triangle does not have either of the sides parallel to each other. It differs from a rectangle in terms of shape and properties related to symmetry. The rectangle would always have equal and parallel opposite sides, while the same is not true for triangles. Hence, rectangles have a fixed symmetry of order 2, while triangles do not have a fixed symmetry.

How To Draw Symmetrical Objects?

Cutting and Comparing: You can start assessing the symmetry of an object by drawing a line from the middle. The parts produced after cutting are kept over each other to check if they are superimposing. Objects superimposing each other completely are called symmetrical. The same method can be used on rectangular paper, where you would discover two axes of symmetry.

Thread Painting: You can dip a thread into ink or any watercolor and then draw a pattern on the paper with the help of colored thread. Fold the paper in half to cover the thread. Press the folded paper with a big book from the top and pull out the thread. You would see a beautiful symmetrical figure on two sides of the paper.

Folding and Cutting: Fold the paper in two or more layers and cut any design out. The paper cuts would result in a beautifully symmetric design when the paper is unfolded. You would find multiple symmetrical objects created.

How many rotational and linear symmetries does a rectangle have?

About How Many Lines of Symmetry Does a Rectangle Have? There are two lines of axes for symmetry in the rectangle. The linear and rotational symmetry of the rectangle is 2.

Is it possible to have linear and rotational symmetry differently?

Yes! It is possible to have rotational symmetry, while no or less linear symmetry. If you check flowers, the leaves might not be symmetrical, but all leaves can be of the same shape. If the flower is rotated and superimposed with the previous position of the flower, then it might superimpose.

Reading about How Many Lines of Symmetry Does a Rectangle Have is interesting, and it becomes more interesting when we relate it to real-life objects. You can find a lot of examples of symmetry in nature, like butterflies. Major architectural buildings follow the principle of symmetry. It gives a great look at the building and provides robust architecture. Many interior decorators, web designers, handicraft workers, and content writers use the symmetry principle for presentable work. Whatever your field of expertise is, symmetry will add a golden tinge to it.

We have some insightful courses and articles to unlock the doors of your symmetrical future. For more such interesting facts on Measurement Tips and Tricks, get in touch with Cuemath. Our wide repository of knowledge articles would be a great feast for your curiosity.

How Much Does A Carrot Weigh? How To Grow The Best Carrots?

How Many Quarts in A Gallon?

Should You Take A Loan To Get Your Child Into Private School?